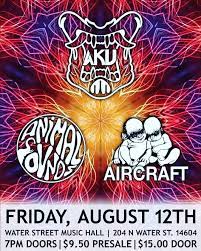 Every member of the band brings a unique set of sounds ranging from influences such as The Mars Volta, Animals as Leaders, Strawberry Girls, Victoria, Nerve, and more.

On the eve of releasing their debut album “Solipsism” the band is already well into recording the next batch of material. Recorded in their hometown at Wicked Squid Studios, each of their singles can be streamed on all major platforms.

Aside from their top-quality recordings, the group specializes in high energy live performances highlighting each members unique voice on their instrument while presenting a unified and massive sound from the stage.

Formed in 2015 by Shawn Brogan and former guitarist Dan Slaughter to showcase riffs and progressive song structures, Animal Sounds is a 5 Piece Alternative Rock band from Rochester, NY that is surely doing their part in reviving guitar focused music.

Receiving comparisons from Cage The Elephant to Steely Dan, Animal Sounds showcases a wide variety of genres including Neo Psychedelic, Garage Rock, Funk, and Indie. The blend of guitar dexterity with emotional vocals will leave you “in the feels” with a sweat soaked T-shirt.

Aircraft makes its musical home within the overlapping worlds of surf-rock and psychedelia, transmit.