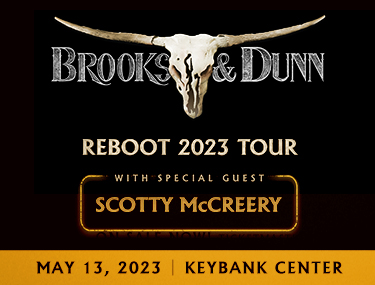 With 20 No. 1 hits stretching back to 1991, two GRAMMY awards, dozens of ACM and CMA honors and a discography counting more album sales than any duo in history – regardless of genre – Brooks & Dunn’s influence on today’s country has never been in question. Hits like “Boot Scootin’ Boogie,” “My Maria” and “Believe” have propelled the duo to more than 30 million albums sold, with the New York Times heralding “together they helped drive the power-country era of the early-to-mid 1990s and continued to benefit from the sea change in the genre they helped initiate right through their most recent albums.” Their original “Merle Haggard meets The Rolling Stones” vibe made them progressive stars in their own right. The duo’s recently released collaboration project REBOOT debuted at No. One on Billboard’s Top Country Albums. The impressive feat marks the first time the duo has topped the album charts since 2009 while simultaneously earning the duo their 10th Billboard 200 Top 10 album, the most of any country duo or group in the chart’s history.  In 2019 the duo was inducted into the Country Music Hall of Fame in the “Modern Era Artist” category. In 2021 Brooks & Dunn undertook their first nationwide tour in ten years with their anticipated The REBOOT 2021 TOUR, as well as wrapped their hugely successful and the longest-running country residency in Las Vegas, “REBA, BROOKS & DUNN: Together in Vegas.” For more information, visit www.brooks-dunn.com.

After achieving five consecutive No. 1 hits during the last few years, Scotty McCreery is currently rising up the country charts with his single “It Matters to Her,” which he wrote with Rhett Akins and Lee Thomas Miller. The song can be found on his current project Same Truck: The Deluxe Album, which also features his three week No.1 hit “Damn Strait” as well as his No.1 hit “You Time” (both RIAA Gold-certified). McCreery has earned one Double Platinum, four Platinum and four Gold singles; one Platinum and two Gold albums; won the 10th season of “American Idol” in 2011; was named the ACM New Artist of the Year in 2011; won the CMT Music Award for Breakthrough Video of the Year (‘The Trouble with Girls’) in 2012; American Country Awards for New Artist of the Year in 2011 and Breakthrough Artist of the Year in 2013; BMI Awards for writing One of the Top 50 Country Songs of the Year five times (in 2015 for “See You Tonight,” in 2018 for “Five More Minutes,” in 2019 for “This is It,” and 2021 for “In Between,” and in 2022 for “You Time”); a Carolina Beach Music Award for National Dance Song of the Year (‘Barefootin’’) in 2018; the NSAI Nashville Songwriter Award for One of the Top Ten Songs I Wish I’d Written (‘Five More Minutes’) in 2018; and the Randy Owen Angels Among Us Award from St. Jude Children’s Research Hospital in 2022. The North Carolina native’s No. 1 hit song “Five More Minutes” has inspired two popular holiday movies (“Five More Minutes” in 2021 and “Five More Minutes: Moments Like These” in 2022) which both aired on the Hallmark Movies & Mysteries Network. McCreery launched his recording career by making history in 2011 as both the first country artist and the youngest male artist of any genre to debut his first studio album, the Platinum-certified Clear as Day, at No. 1 on the all-genre Billboard Top 200 Albums chart. McCreery married his high school sweetheart Gabi in 2018. The couple had their first child, son Merrick Avery McCreery, in October 2022. For more information, visit www.ScottyMcCreery.com.