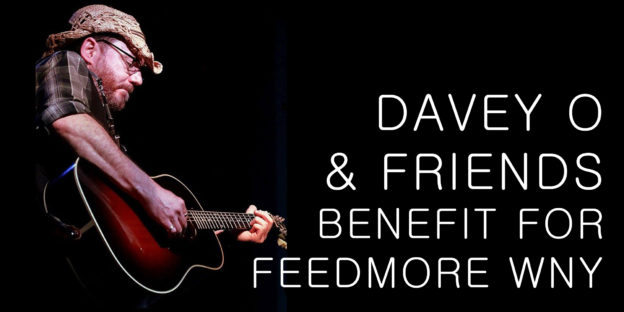 Davey O. is an award winning and critically acclaimed singer-songwriter based in Buffalo, NY. His work has been recognized by his selection as a New Folk Songwriting Finalist at the prestigious Kerrville Folk Festival in 2013, as a 2015 Finalist in the 32nd Annual Mid-Atlantic Song Contest, and as a 2016 & 2017 nominee for the Sportsmen’s Americana Music Foundation Jim Lauderdale Songwriter of the Year Award. His most recent CD release, 2017’s “A Bright Horizon Line” has been well received by radio and by music publications around the globe, debuting as a Top 20 album on the Folk DJ Charts, and receiving glowing reviews in several music publications, including the pages of what is considered to be “the journal of Roots Music” – No Depression magazine. His previous release, “No Passengers” (2014), was counted among the Top 100 Contemporary Folk Albums of 2014 on the Roots Music Reports, and among the “Best of 2014” lists of WHRW (Binghamton, NY), WAMC (Albany, NY), The Sundilla Radio Hour (Auburn, AL), WMSC (Montclair, NJ), Radio Crystal Blue (Tacoma, WA), WVPE (Elkhart, IN).

Since June of 2020, Davey has been releasing new music via his website under the title of “The Share Project”, with all download proceeds donated to FeedMore WNY – his local food bank. Davey currently resides in the Buffalo suburb of Amherst, NY with his partner Sheila, their dog Addison, and their cats Grace and Bigsby.

When served as an eclectic brew of Blues and Roots, Rockabilly Steve is an outstanding guitarist and vocalist who has blended many genres of music for his unique and haunting sound. Refusing to be categorized as one style of music, he blends them. Blues with Swing, Rock with Blues, Roots with Jazz and so on. What you get is this amazing sound that is truly original and uninhibited and real!

Since the age of seven Rockabilly Steve’s showmanship has captivated audiences with his high energy performances that transport audiences back in time with his blend of Blues, Jazz, Swing, Roots, Rockabilly and Original music. The Fans dance, stomp, and sing along to his Original songs. Rockabilly Steve and BR3 is a band that knows how to entertain!

Comprised of five accomplished musicians, Three are family members, Rockabilly Steve and BR3 are a good time family band with members: John Durusky ( Father) on Palatino upright electric bass, Steven Durusky (Son) on lead guitar and vocals, who is an accomplished songwriter, and Lynnie Durusky (Mother), on rhythm guitar and vocals. When we perform as a full band, we have Buffalo Music Hall of Fame drummer, Al Hury on drums and award-winning Kenny Parker on Saxophone. We also perform as a trio, Mom, Dad and son as Rockabilly Steve and BR3 Trio. BR3 Stands for Blue Roadhouse trio.

We released our first CD Entitled: Feeling Down Live At the Music Room available on Amazon, Spotify, iTunes, Apple Music, YouTube Music and all of your streaming services. Rockabilly Steve and members are currently recording our second CD release.

John Moore is the frontman of a new musical project John Moore And Missing Star, as well as the long standing Western New York based band 53 Days.

As songwriter he penned the song “Shelter Me” for the soundtrack album to the movie Lonestar State Of Mind. The movie featured John Mellencamp in a role. The songs “These Days” and “When it Goes ’round” were used in the film “Last Big Attraction”, the latter over the closing credits. As well as many songs that have been heard on MTV, CBS and E!.