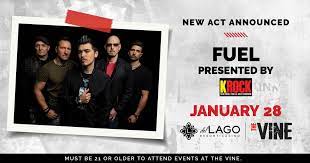 Fuel formed in 1993 while playing the club circuit in and around Harrisburg, Pennsylvania. The band signed to Sony Records and in 1998 released their critically lauded, debut album Sunburn with the massive hit single “Shimmer”. Their second album Something Like Human took the band to a new level of stardom, hitting multi-platinum status driven by the singles “Innocent” and “Hemorrhage”, which remained at #1 for ten weeks. In 2003 Fuel released their third record Natural Selection, and found success at radio again with the hit song “Falls On Me”.

At that point the band had sold over 3.5 million records in the U.S alone, and had scored a trio of releases with top five singles. The band had headlined its own sold out tours, as well as supporting the likes of Aerosmith and Kid Rock. But even what seems like the best of circumstances can prove to be difficult and unhappy with the direction and lack of unity inside the band, Brett Scallions amicably parted ways with Fuel in 2004.

During his time away from Fuel, Brett continued to write music and toured with Ray Manzarek & Robby Krieger of the Doors.  “When I left Fuel I was miserable, it did not feel like a band anymore,” says Brett, continuing: “Unity was non-existent. Performing those amazing Doors songs with two legends, who are two of the architects of that sound was eye opening, life changing, and opened a whole new perspective on music and life. I realized much music is about freedom, and not being confined to formats.”

In 2014 Fuel released Puppet Strings, on MRI/Red. Catapulted by the first single, the driving, hypnotic “Soul To Preach To”, the album entered the Billboard rock charts at #1.  The fans spoke loud and clear to the band and “Cold Summer” became the second single. The Fuelies were right, as “Cold Summer” became a staple on rock radio cracking the top 20 at rock radio throughout the summer, with a video that is a classic throw back to when rock videos were fun. “Rock n Roll is very much alive on this record,” says Scallions, “Fuel is fully reignited, and it feels like we are just getting started.”