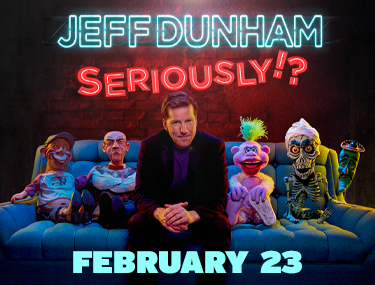 For the past Fourteen years, Jeff Dunham and his somewhat-inappropriate-proteges, Peanut, Walter, José Jalapeño, Bubba J. and Achmed the Dead Terrorist and have filled arenas across the U.S. and the world with their multiple, blockbuster tours. Like every other touring act around in the world, after being forced to put his live shows on hold due to COVID-19, Jeff Dunham is ready to pull his characters including his new puppet URL out of their suitcase and get the hilarity pumping once again.

Dunham and his cohorts will set out on their new international tour, “JEFF DUNHAM: SERIOUSLY!?” highlighted with a stop at KeyBank Center in Buffalo on Wednesday, February 23 at 7 p.m.