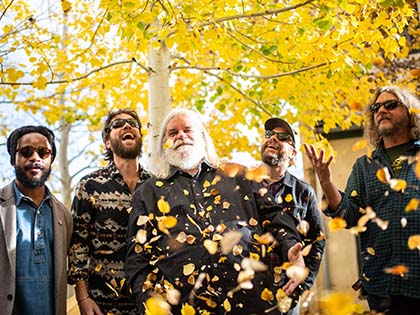 Few bands stick around for thirty years. Even fewer bands leave a legacy during that time that marks them as a truly special, once-in-lifetime type band. And no band has done all that and had as much fun as Leftover Salmon. Since their earliest days as a forward thinking, progressive bluegrass band who had the guts to add drums to the mix and who was unafraid to stir in any number of highly combustible styles into their ever evolving sound, to their role as a pioneer of the modern jamband scene, to their current status as elder-statesmen of the scene who cast a huge influential shadow over every festival they play, Leftover Salmon has been a crucial link in keeping alive the traditional music of the past while at the same time pushing that sound forward with their own weirdly, unique style.