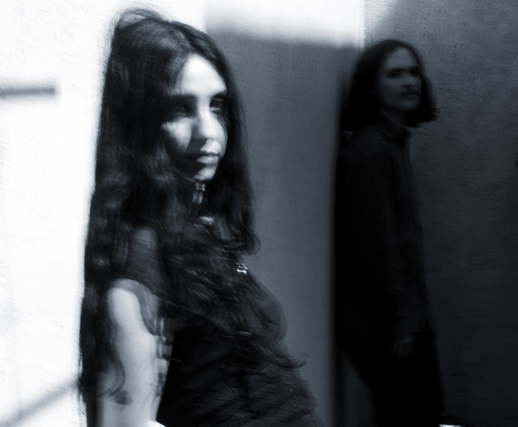 Originally from Tijuana & now based in Mexico City (two of the most exciting places for emerging music & art in Mexico) Mint Field is one of the bands that helps make both cities shine. Mint Field is guided by Estrella del Sol on vocal & guitar duty, Sebastian Neyra on the bass, and Callum Brown on the drums. The band explores the nostalgia & melancholy of daily life with loud guitars and vocals; like a breath of life into a unique & supernatural style of shoegaze. The instrumentation and atmospheres are accompanied by delicate, harmonious, and ethereal vocals that are a fundamental part of the sound.

With releases such as their debut album Pasar de las Luces (2018), produced by Christopher Koltay, and the Mientras Esperas EP (2019)—both on Innovative Leisure—their sound has evolved with the influence of years touring the globe. Following the release of Pasar de las Luces, the band played over 100 shows across the United States, Mexico, and their first two headline tours in Europe. At the end of that year, they recorded Mientras Esperas in Long Beach, California—a 5-track EP that defines the live sound of the band. “Mientras Esperas was a combination of everything we had learned throughout the year and the sounds with which we wanted to experiment on our next LP.” – Estrella del Sol

In Spring 2019, they toured the US and Canada with US before a summer tour through Mexico that wrapped with two sold-out shows in Mexico City.

In the Fall of 2019, the band entered Wilton Way Studios in London to record their follow-up album, Sentimiento Mundial. The recording sessions took place with the help of producer Syd Kemp & drummer Callum Brown—both members of Ulrika Spacek. This album has a cleaner, more distinct guitar sound that praises the influences of Helvetia and Thurston Moore; hypnotic bass lines that create a smooth yet complex bed; drums that gallop and ride to add a unique groove to the song; and, as always, breezy, romantic vocals from Estrella.

Mint Field recorded another album in Mexico City in 2021, which is set to release early 2022.

Always praised by the press, Mint Field is considered one of the most comprehensive bands in Mexico—a truly unique sound with passion & energy that takes you to unimaginable places.