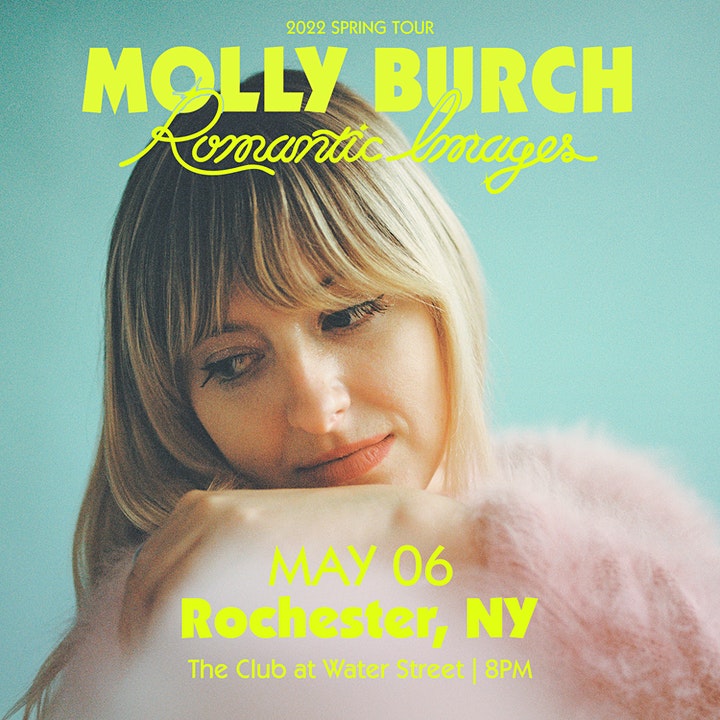 Celebrating the timeless delights of a well-crafted pop song, Molly Burch’s captivating new album, Romantic Images, marks a distinct evolution, both from an emotional and a sonic perspective. Produced by Tennis’ Alaina Moore and Pat Riley, the collection flirts with Blondie, Madonna, and even Mariah Carey as it forges a joyful soundtrack to liberation and self-discovery, one that finds Burch shedding the insecurity of her 20s and embarking on a bold new chapter marked by a radical embrace of her womanhood. Burch wrote the album with her live show in mind and deliberately worked with more female collaborators than ever before on the album, and the results are utterly transcendent, prioritizing ecstasy and escape at every turn and reveling in the passion and the power of the divine feminine.

Born and raised in southern California, Burch grew up infatuated with torch singers like Billie Holiday and Nina Simone, and after studying jazz vocal performance in college, she settled down in Austin, TX, where she recorded her breakout 2017 debut, Please Be Mine, over the course of a single day. The album prompted an avalanche of acclaim and landed on a slew of Best Of lists, with Pitchfork hailing its “smoky vocals” and “shimmering guitar riffs.” A year later, she followed it up with the similarly well-received First Flower, which prompted GQ to proclaim that “Burch has the voice of an angel” and spurred NPR’s World Café to add that “she’s got the songwriting chops to back it up.”

What does it mean to feel pride – to feel love? Not just romantic desire, but an all-encompassing love built around acceptance and unconditional respect? For 24-year-old indie/alternative artist NoSo, they seek out the answers in their work. If you’re a guitar enthusiast or familiar with the L.A. music scene, you may already know the name Abby Hwong. Born and raised in the Chicago suburbs before moving to California as a teenager, Hwong cut their teeth at the competitive Thornton School of Music at USC, where they studied guitar and songwriting and began to develop their own unique playstyle.

After originally pursuing the path of more instrumental players like Tommy Emmanuel, Hwong realized in college that their writing was quickly manifesting itself in new, more personal ways: in lyrics, arrangements, songs that begged to be sung and fully realized.

Born and raised in the Chicago suburbs before moving to California as a teenager, NoSo is shorthand for North/South: a nod to their Korean heritage, and the inane origin question (“Which Korea are you from?”) that so many Korean Americans inevitably face at some point in their lives. Hwong’s writing often indirectly grapples with the insecurities and frustrations that can arise from the Asian American experience. Their writing feels like a balm for the alienated. Hwong writes and records much of their work alone in their bedroom, studying any non-guitar instruments they weren’t as proficient with in order to make it happen. On the fluttery new single “Suburbia,” they move between a heart-rending chorus and diaristic lyrics about golden Oreos and power-walking moms with the grace of a seasoned screenwriter, sprinkling in the small but vivid details that place you in the heart of the story.

Just as there is no singular Asian American experience, there is no singular LGBTQ experience. Hwong, a queer non-binary person, remembers that the first time they realized they were attracted to women was when they wrote a romantic song with femme pronouns. They don’t remember ever explicitly coming out in public; from the start, their declaration of themselves to the world at large has always been through music.