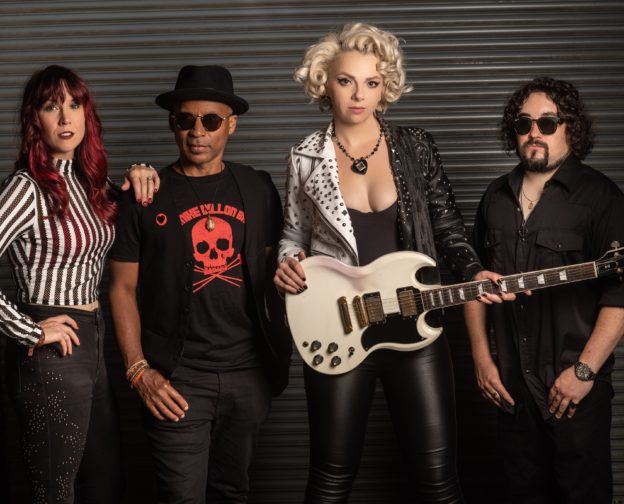 “That was my mission on this album: to really set these songs up so that they have a life of their own,” says Samantha Fish about Kill or Be Kind, her sixth solo album and debut on Rounder Records. “Strong messages from the heart – that’s what I really set out for.” Indeed, what comes across immediately on hearing the record is the extraordinary level of songcraft on its eleven tracks; the way these songs are so smartly put together to deliver a potent emotional impact. This will be Samantha Fish’s first appearance in Buffalo since her fast sellout at The Tralf in 2019, as part of her 30+ date national fall tour!

Anyone who has ever heard Fish’s previous albums knows that she has earned a place in the top rank of contemporary blues guitarists and that her voice can wring the soul out of a ballad and belt out a rocker with roof-shaking force. And, rest reassured, those virtues are fully in evidence on Kill or Be Kind. But each of the songs on the album does far more than simply provide a setting for Fish’s pyrotechnics. They tell captivating stories, set up by verses that deftly set the scene, choruses that lift with real feeling, and hooks that later rise up in your thoughts, even when you’re not aware that you’re thinking of music at all. It’s the kind of songwriting that emerges when raw talent is leavened by experience and aspiration, and when a committed artist genuinely has something to say. Those qualities make Kill or Be Kind a genuine artistic breakthrough for Samantha Fish.

“I think I’ve grown as a performer and as a player,” she continues. “I’ve become more respectful of the melody. You can go up and down the fret board and up and down your vocal register, but that’s not going to be as powerful as conveying a simple melody that people can really connect to and sing themselves.”

Having completed an album that she believes in so strongly – “This is me coming through, my personality,” she says – Fish is eager to bring it to the world. “I got the moon in the back of my mind, and I want to shoot for it!” she declares. “I want to reach over genre lines and get out to as many people as possible. This album is so broad – and it’s all me. So I’m just hoping it catches people and appeals to them.”

She concludes, “Overall my big goal, career-wise, is to contribute something different and new to music. I want to give something that stands apart and yet is timeless.” With Kill or Be Kind, Samantha Fish is well on her way.

Jonathon Long hails from Baton Rouge and, at 29 years old, has established himself regionally in an area rich with blues legacy tracing to Buddy Guy, Kenny Neal, Tabby Thomas, Lightnin’ Slim and others.

It was at 14 years old Jonathon’s passion for the music is what convinced his parents to take a leap of faith when their 14-year-old son approached them with his plans. The Longs signed over partial custody of their son to Blues Musician Henry Turner, allowing him to play out-of-state gigs where the presence of a legal guardian was required. A working musician before he was old enough to hold a learner’s permit, Long has been growing his fan base non-stop. Playing festivals the world over, including his yearly spot at the New Orleans Jazz & Heritage Festival has honed his skills to a razor’s edge.

New Orleans blues legend Luther Kent gave Long his first taste of the New Orleans Jazz and Heritage Festival stage and helped him blossom into the artist he is today. In 2011, Long was named Guitar Center’s “King of the Blues” then hit the road on his own opening shows for Tab Benoit, Big Head Todd and the Monsters, and others. It wasn’t until a 13-date run opening for BB King when BB told Jonathon “You can really play that guitar boy; I stole some of your licks.”