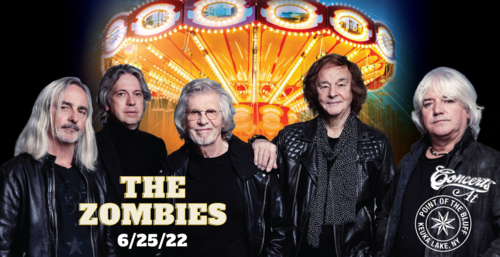 The second UK group following the Beatles to score a #1 hit in America, The Zombies infiltrated the airwaves with the sophisticated melodies, breathy vocals, choral back-up harmonies and jazzy keyboard riffs of their 1960’s hit singles like “She’s Not There” and “Tell Her No”.  Ironically, the group broke-up in 1968 just prior to achieving their greatest success – the chart-topping single “Time of the Season”, from their swan-song album “Odessey & Oracle” (recently ranked #100 in Rolling Stone’s “500 Greatest Albums of All Time”).  In the intervening years, while lead singer Colin Blunstone went on to develop an acclaimed solo career, and keyboardist/songwriter Rod Argent rocked ‘70’s arenas with his eponymous band ARGENT, the legend of The Zombies took on a life of its own. Generations of new bands have cited The Zombies’ work as pop touchstones, including such artists as Neko Case and Nick Cave (who have recorded “She’s Not There” for the popular HBO series True Blood), She & Him, Beck, Belle and Sebastian, The Black Angels, The Fleet Foxes, Beach House and The Beautiful South.

The ten songs that make up their latest album, “Breathe Out, Breathe In”, are impeccably crafted; the harmonies are rich, the melodies full, the arrangements exquisite, the organ and piano fresh and the production intuitive. The Huffington Post’s David Wild called the album “inspired” and said “some songs recall the haunting melodic heights of the group’s 1968 masterpiece Odessey and Oracle.”