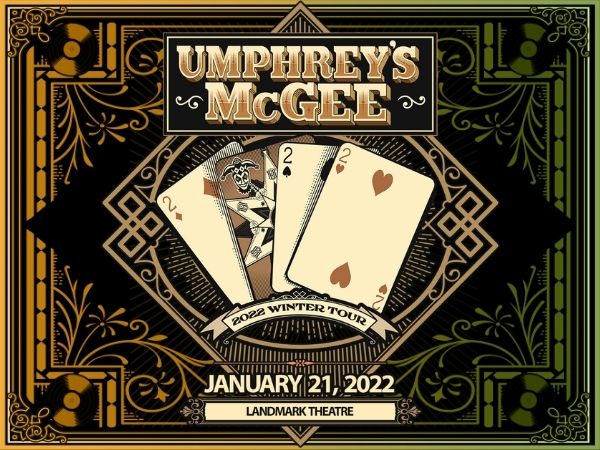 YOU WALKED UP SHAKING IN YOUR BOOTS BUT YOU STOOD TALL AND LEFT A RAGING BULL is the latest achievement in the career of Umphrey’s McGee, adding to 2,200+ gigs and 250 million+ tracks streamed. You-had-to-be-there moments include the band’s performance at the first-ever Bonnaroo and selling more CDs (remember those?) than any other act on the bill. A leader in the live music world, Umphrey’s McGee became the first group to launch its own single-artist streaming service with UMLive.net, which houses recordings of every gig since 2005. The service has since grown and now lives on through Nugs.net, which is used by the likes of Pearl Jam, Bruce Springsteen, and more.

Beyond intimate backstage encounters and ski trips with their most diehard fans, Umphrey’s McGee instituted the groundbreaking “Headphones & Snowcones” program, granting fans access to professional headphones and a soundboard-quality mix to listen wirelessly at shows. At their UMBowl, they empowered the audience to vote on the setlist in real-time and choose favorite improv themes via text message. In 2017, they stepped into another realm altogether by integrating themselves into the VR Platform Endless Riff. The wonders, it seems, never cease. From their initial bar gigs in 1998 to repeatedly playing three-night runs to packed crowds at the legendary Red Rocks Amphitheatre, the group has simultaneously remained intensely committed to their fans.