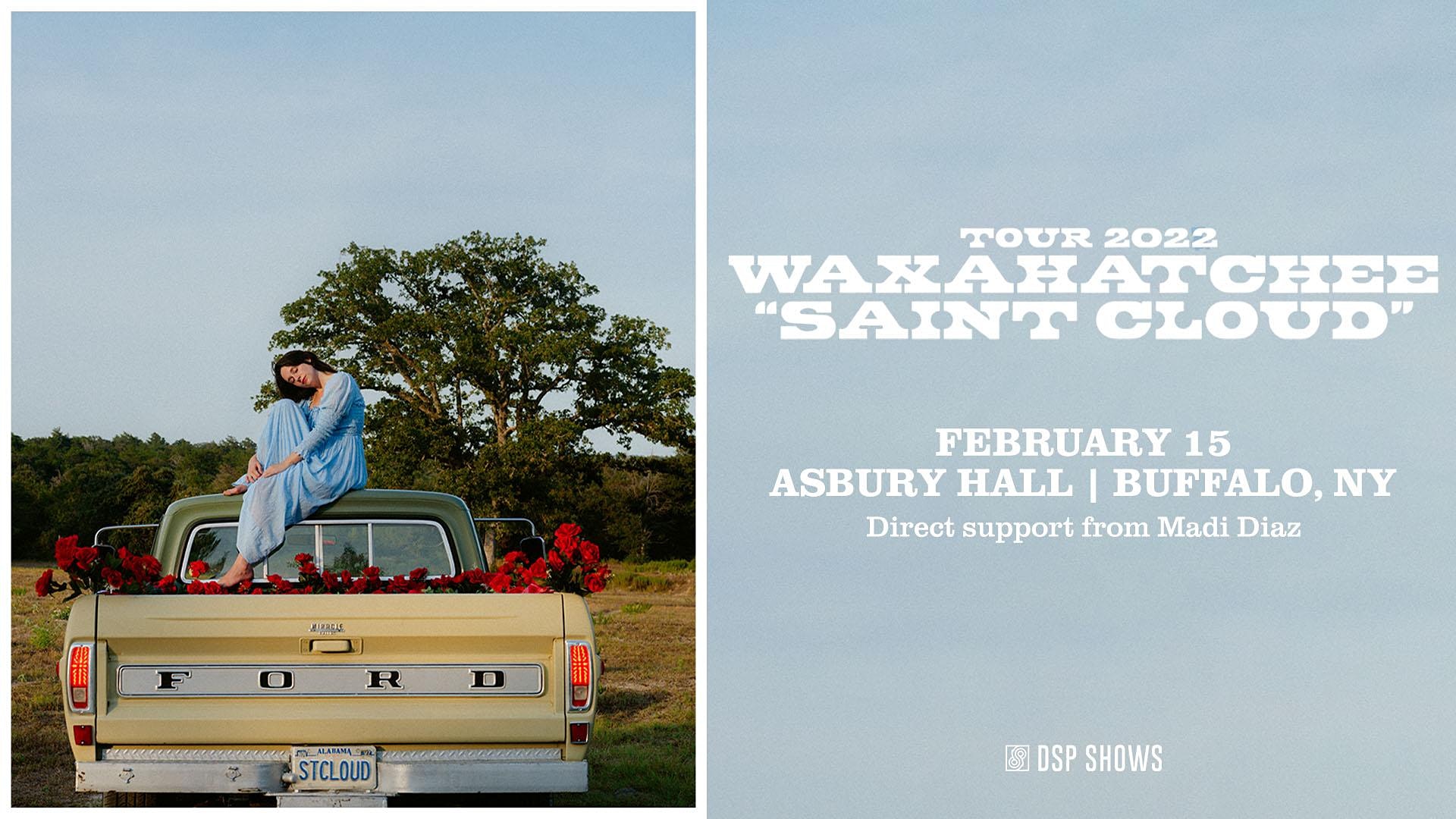 What do we hold on to from our past? What must we let go of to truly move forward?

Waxahatchee’s Katie Crutchfield, a lyricist who has always let her listeners know exactly where she is at a given moment, spent much of 2018 reckoning with these questions and revisiting her roots to look for answers. The result is Saint Cloud, an intimate journey through the places she’s been, filled with the people she’s loved.

Written immediately in the period following her decision to get sober, the album is an unflinching self-examination. From a moment of reckoning in Barcelona to a tourist trap in Tennessee to a painful confrontation on Arkadelphia Road, from a nostalgic jaunt down 7th Street in New York City to the Mississippi Gulf, Crutchfield creates a sense of place for her soul-baring tales, a longtime staple of her storytelling.

This raw, exposed narrative terrain is aided by a shift in sonic arrangements as well. While her last two records featured the kind of big guitars, well-honed noise, and battering sounds that characterized her Philadelphia scene and strongly influenced a burgeoning new class of singer-songwriters, Saint Cloud strips back those layers to create space for Crutchfield’s voice and lyrics. The result is a classic Americana sound with modern touches befitting an artist who has emerged as one of the signature storytellers of her time.

From the origins of her band name—the beloved creek behind her childhood home—to scene-setting classics like “Noccalula” and “Sparks Fly,” listening to Waxahatchee has always felt like being invited along on a journey with a steely-eyed navigator. On Saint Cloud, Crutchfield adds a new sense of perspective to her travels. Reflecting on this, she says, “I think all of my records are turbulent and emotional, but this one feels like it has a little dose of enlightenment. It feels a little more calm and less reckless.”

Many of the narratives on Saint Cloud concern addiction and the havoc it wreaks on ourselves and our loved ones, as Crutchfield comes to a deeper understanding of love not only for those around her but for herself. This coalesces most clearly on “Fire,” which she says was literally written in transit, during a drive over the Mississippi River into West Memphis, and serves as a love song to herself, a paean to moving past shame into a place of unconditional self-acceptance. Coming from a songwriter long accustomed to looking in other directions for love, it’s a stirring moment when Crutchfield sings, “I take it for granted/If I could love you unconditionally/I could iron out the edges of the darkest sky.”

Which is not to say that Saint Cloud lacks Crutchfield’s signature poetry on matters of romantic love. Still, her personal evolution in this area is evident too, as this time around, Crutchfield examines what it really means to be with someone and how it feels to see our own patterns more clearly. On “Hell,” she sings: “I hover above like a deity/But you don’t worship me, you don’t worship me/You strip the illusion, you did it well/I’ll put you through hell.”

Crutchfield also looks at what it’s like to be romantically involved with another artist, someone in search of their own truth, on “The Eye”: “Our feet don’t ever touch the ground/Run ourselves ragged town to town/Chasing uncertainty around, a siren sound” and “We leave love behind without a tear or a long goodbye/as we wait for lightning to strike/We are enthralled by the calling of the eye.”

And of course, even when Crutchfield is taking a more nuanced approach to love, her ease with all-encompassing sentiments is still clear, with lines like “I give it to you all on a dime/I love you till the day I die” which sound culled from a classic torch song.

Over the course of Saint Cloud’s 11 songs, which were recorded in the summer of 2019 at Sonic Ranch in Tornillo, TX, and Long Pond in Stuyvesant, NY, and produced by Brad Cook (Bon Iver, Big Red Machine), Crutchfield peels back the distortion of electric guitars to create a wider sonic palette than on any previous Waxahatchee album. It is a record filled with nods to classic country (like the honky tonk ease of “Can’t Do Much”), folk-inspired tones (heard in the confessional lilt of “St. Cloud”), and distinctly modern touches (like the pulsating minimalism of “Fire”).

To bolster her vision, Crutchfield enlisted Bobby Colombo and Bill Lennox, both of the Detroit-based band Bonny Doon, to serve as her backing band on the record, along with Josh Kaufman (Hiss Golden Messenger, Bonny Light Horseman) on guitar and keyboards and Nick Kinsey (Kevin Morby, Elvis Perkins) on drums and percussion. Bonny Doon will also perform as Crutchfield’s live band during her extensive tours planned for 2020, which include the US and Europe.

Saint Cloud marks the beginning of a journey for Crutchfield, one that sees her leaving behind past vices and the comfortable environs of her Philadelphia scene to head south in search of something new. If on her previous work Crutchfield was out in the storm, she’s now firmly in the eye of it, taking stock of her past with a clear perspective and gathering the strength to carry onward.

Kate Bollinger’s songs tend to linger well beyond their run times, filling the negative space of ordinary days with charming melodies and smart phrasings. She writes them at home in Richmond, Virginia, letting her subconscious lead sessions on guitar, an open-ended exercise she likens to dreaming. From a chord progression appears a line, maybe a syllable will start to stick, enough to pursue, but she says sometimes they don’t even feel like hers, these words, more like shapes that form in the mind’s sky. While many are personal and deal with the emotions that surface with finding her place in the world, she’d prefer they be whatever you’d like them to be, to connect with listeners in their own way. Bollinger’s musical universe is relaxed, tender, and unassuming; within lives a timeless sensibility, a songwriter’s knack for noticing the little things and their counterpoints. Darkness and light, pain and pleasure, reality and escape.

Her project is collaborative; she shoots music videos with her friends and colors each of her folk-pop songs with her band. An agile group of players with backgrounds in jazz, they recorded her first EP, I Don’t Wanna Lose, as live takes in a single day, then slowed it down to build out her 2020 EP, A word becomes a sound. Bollinger sings fast at times; she jokes that can get her into trouble when it comes to playing live, “some of these songs are going to be a mouthful.” She’s always been drawn to singers in that free-flowing style and got into the habit of writing quickly while watching her longtime collaborator John Trainum work with rappers in the studio. Ah

Forced to finish her last EP in lockdown, Bollinger, Trainum, and bandmates excitedly returned to sessions in the spring of 2021 to explore a new batch of songs, the first of which to emerge is “Shadows,” written with Trainum and guitarist Chris Lewis. Warm and languid melodies mingle with pointed lyrics; there’s an air of mischief sweetened by a surreal, fish-eyed video directed by Bollinger’s childhood friend, Kia Wassenaar. “Maybe the last year made me want to hide a little,” says Bollinger, referring to the song’s abstract nature. Her verses and chorus bounce along stuttered percussion; augmented with swirling flourishes, the arrangement is as much ‘60s psychedelia as it is beat-infused contemporary pop. Then, with the flip of a switch there is a misty chord change in the final minute and we are sent softly tumbling down a lullaby daydream trapdoor. The outro broadcasts from somewhere softer, the afterglow of self-examination or perhaps the antidote to the introspective sting.

Nashville-based ​Madi Diaz ​marks a full restart of her artistic career with ​”Man In Me,” ​her poignant debut single/video for ​ANTI-. ​It’s a first taste of how Diaz has worked at perfecting the craft of delivering a full spectrum of emotions via songs stripped to their most confrontational and raw form. This song was produced by Diaz with additional production by Andrew Sarlo​ (Big Thief, Bon Iver). Across reverberating guitar strums and light piano, Diaz’s voice is evocative as she makes frank observations about a past relationship: “​Do you imagine me differently // Cause when I met you swore that you saw me // When you think I might be someone else // Does it turn you on​.” As the track continues, Diaz’s vocals swell exponentially, only to be drawn back to a fading note.

“​’Man In Me’ was the first song I sat down to record for myself in about six years, which is the reason I thought it was so important to release first. It’s a very intimately visceral moment, a sort of play-by-play inner monologue, taking my first steps through a really hard time.​” The accompanying video, directed by ​Stephen Kinigopoulos, “​ ​emphasizes the intensity of a moment held and held and held. For me, this video is like holding a stare for so long that it hurts. It’s like knowing you should let go, but you keep holding on cause you can’t say ‘when,’ and playing with that tension lying right beneath the surface. You know something’s up, but you just can’t put your finger on it.​”

Diaz was originally raised in Lancaster, Pennsylvania surrounded by a family deeply immersed in music: her grandfather was a tenor in the Greenwich City Opera, both of her parents taught music lessons (piano, guitar and ukulele), her father played in a Zappa tribute band and her brother plays in a metal band. She moved to Philadelphia in her teens to have closer access to broader music education, before eventually enrolling in (and dropping out of) Berklee College of Music and moving to Nashville to more seriously pursue a career as a songwriter. After cutting her teeth in writers rooms in Nashville, Diaz moved to Los Angeles honing her songwriting skills and playing in numerous projects. After a very tumultuous relationship and break up, she bought a truck and moved back to Nashville where she became a go-to songwriter. As things slowed down, Diaz felt she had the time and space to fully confront everything in her life with a newfound sense of clarity. Over the next two years, she wrote over 100 songs, one of which is “Man In Me.” The songwriting expertise she had developed over the years is now championed in her own strikingly original and emotional music.